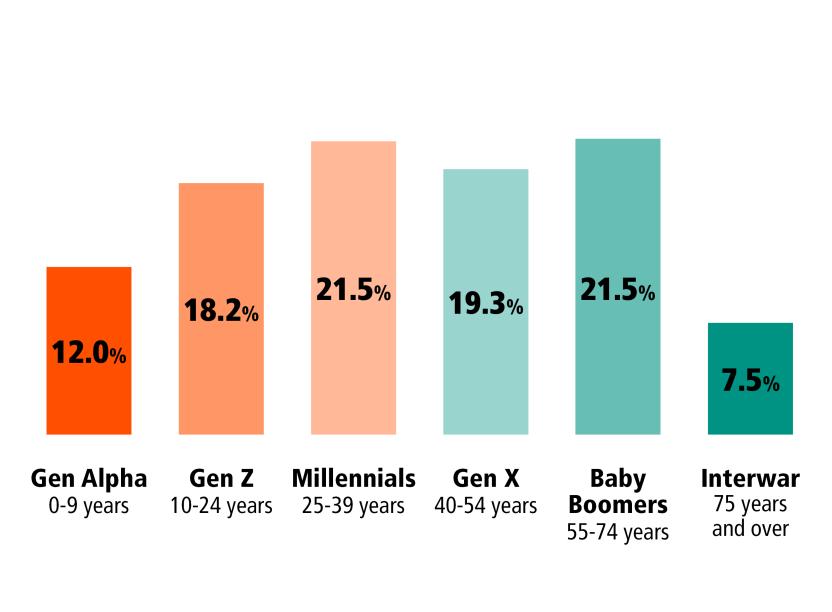 The 2021 Census of Population and Housing has delivered a snapshot of the different generations that make up Australia.

The latest data reveals that, within a very small margin, numbers of Millennials (25-39 years old) have caught up to Baby Boomers (55-74 years old) as the largest generational group in Australia. In the 1966, Census nearly two in every five people (38.5 per cent) were Baby Boomers.

Dr David Gruen AO, Australian Statistician, said “The data collected by the Census assists governments and community organisations to understand the needs of each generation. We see that an increasing number of Baby Boomers are needing assistance with core activities – with 7.4 per cent reporting a need for assistance, compared to 2.8 per cent across the younger generations. This information will help frame policy that delivers positive outcomes for our communities.”

Census data shows the important role Baby Boomers are providing in caring for other peoples’ children, often their grandchildren. Around one in eight (12.8 per cent) Baby Boomers reported caring for other peoples’ children, and of these two thirds are female (67.5 per cent). They are also the generation most likely to volunteer and provide unpaid assistance to others.

Millennials are of working age and are upskilling, representing 40 per cent of people attending vocational education, including TAFE, and 48 per cent of people currently serving in the regular service of the Australian Defence Force.

Generation Z (10-24 years old) represent 18 per cent of Australia and 30 per cent of the Aboriginal and Torres Strait Islander population.